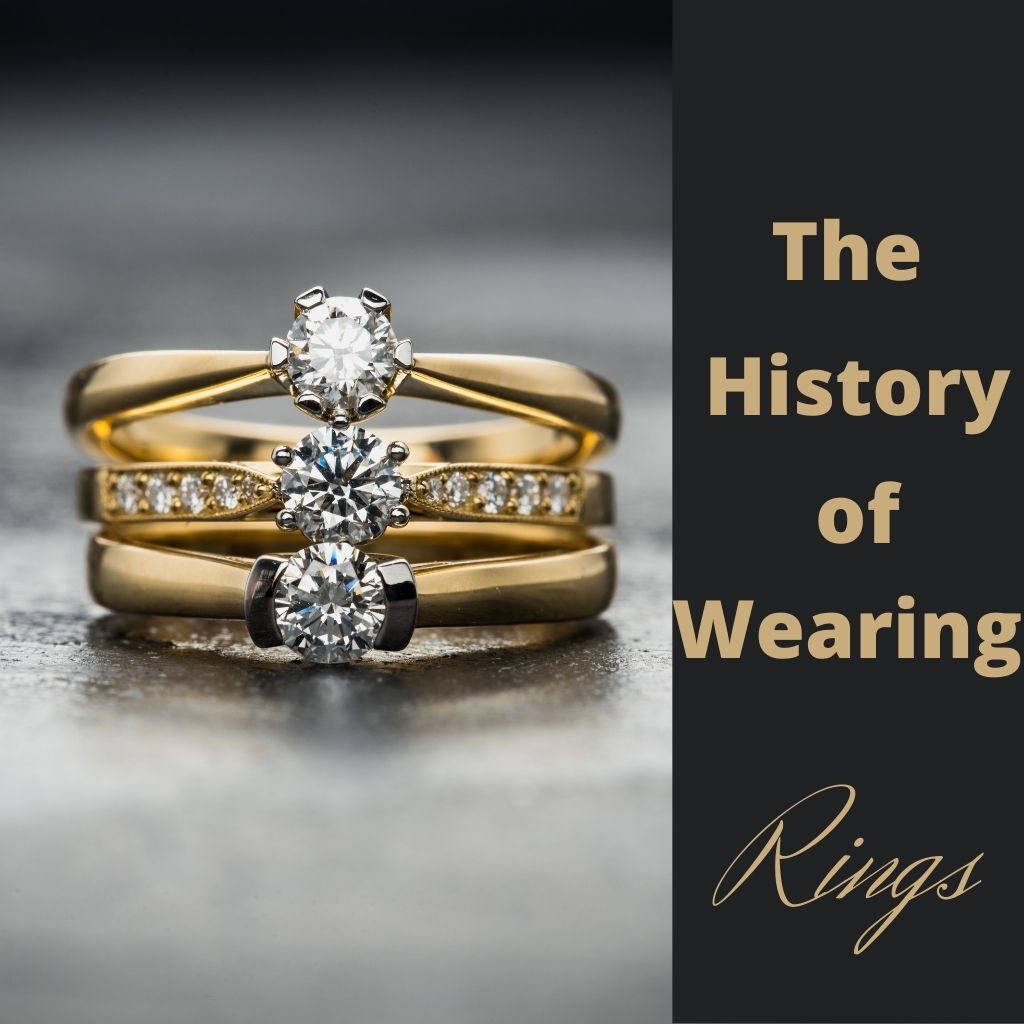 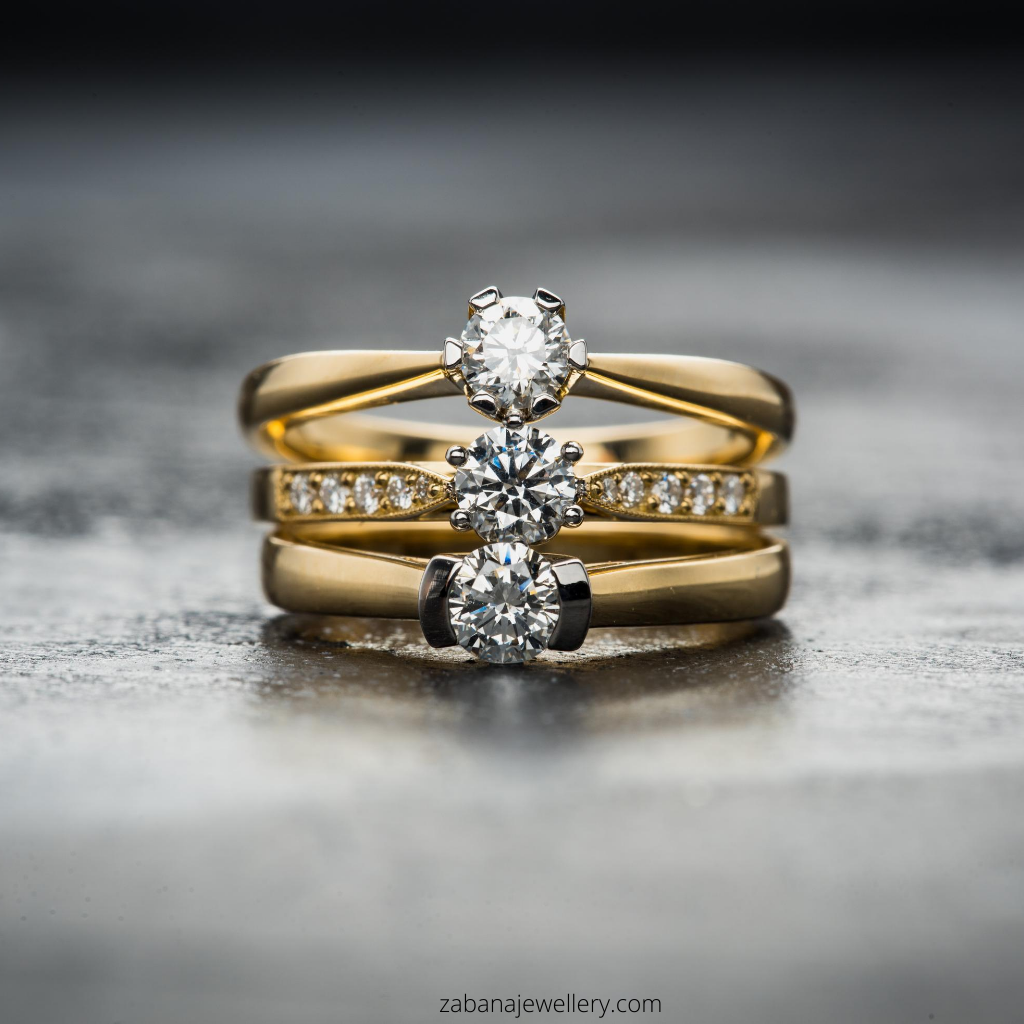 The history of wearing rings is long, spanning thousands of years, too long to cover everything.

Rings first became popular during the Medieval period. Rings were worn by all classes of the population, from the richest down to the very poorest.

Rings were typically made of iron, copper, silver and gold.

The class of the wearer was indicated by the material of the ring.

Rings can be a sign of wealth as well as being symbolic for love and marriage.

Rings, necklaces, bracelets, earrings, pendants and bangles were  discovered in India going back to 3000 BC.

Finger rings have been found in tombs in Ur dating back to circa 2500 BC.

Antique Greek rings were to some extent influenced by Egyptian rings, although they tended to be smaller. As gold was not locally available, rings made in the eastern colonies tended to be made from silver and bronze.

In the 4th and 5th centuries BC, there was a shift away from bronze to a wider adoption of silver and gold. The most typical design of the period involved a lozenge bezel mounting.

Over time, the bezel moved towards a more circular form.

During the first two centuries AD, also known as the early and middle imperial era, a typical Roman ring was made up of a thick hoop that tapered directly into a slightly wider bezel. Within the bezel would be an engraved oval gem. The top of the gem would on only slightly rise above the surrounding ring material.

Rings dated back to the first two centuries are known as Henig II and III/Guiraud 2 rings. 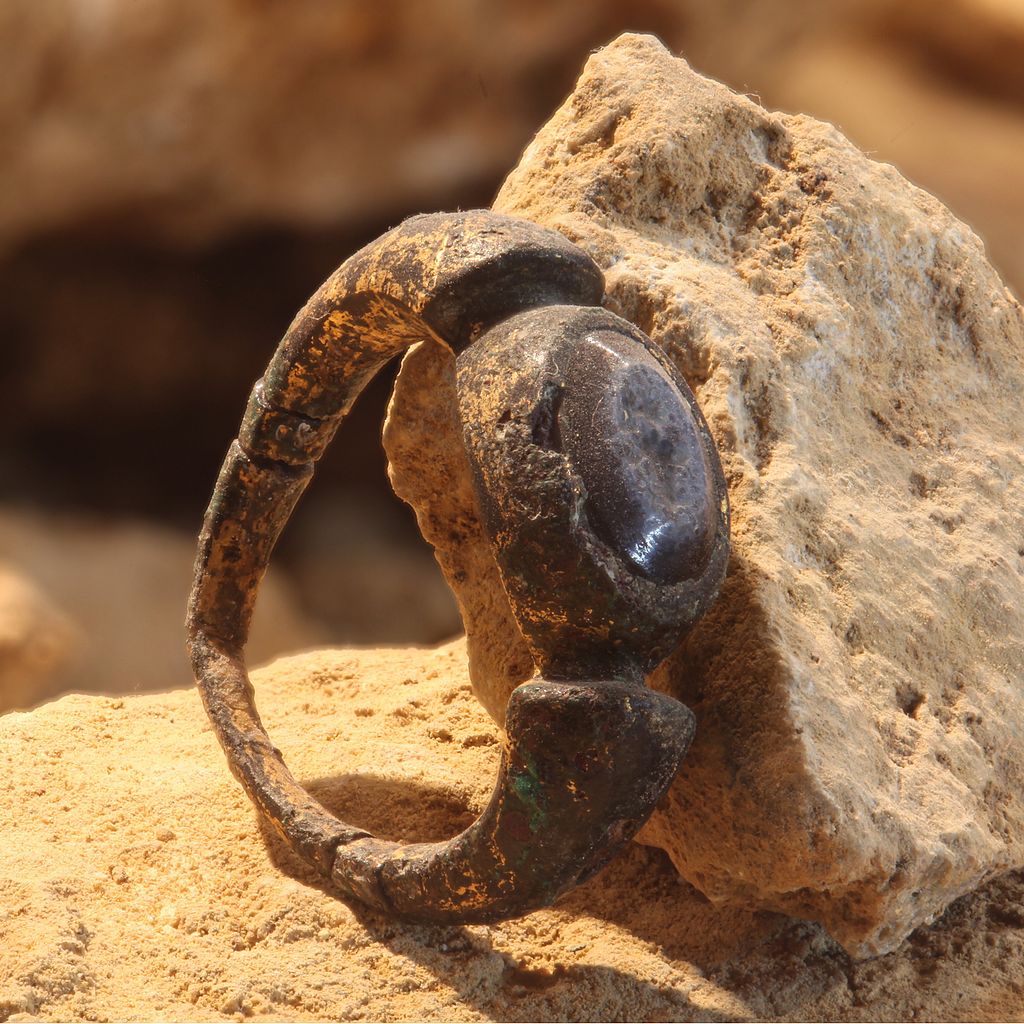 The popularity of rings increased during the Medieval period. Rings were worn by all classes of the population, from the richest down to the very poorest.

During the Middle Ages, it was fashionable to wear multiple rings on each hand and each finger.

During this period rings were mostly made from copper-based alloys, silver or gold.

Gems became common after 1150, along with the belief that certain gems had the power to help or protect the wearer in various ways.

Rings were engraved with Lombardic script until around 1350, when it was replaced by Gothic script.

The 13th century onwards saw an increasing use of contracts and other documents requiring formal seals, therefore, there was a rise in the popularity of signet rings.

Rings were typically made of iron, copper, silver and gold. The class of the wearer was indicated by the material of the ring.

In the 14th century, faceted jewels started appearing in rings.

Throughout the world, some cultures have rings typically associated with them.

To this day Native Americans used silver and turquoise in their jewellery. 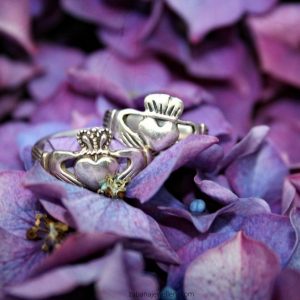 One of the best known rings is the Irish Claddagh ring which dates back to the 17th century and has an interesting story behind it; Richard Joyce, a silversmith, was among the crew of a boat when in 1675 it was captured by pirates in the same week he was to have been married.

He spent many years in Barbary (North Africa) where he was eventually freed through intervention by the British Crown.

He settled in Galway with a ring, we now know as a Claddagh ring, which he had made whilst in captivity. He gave the ring to his love and after their marriage became a successful goldsmith.

Bartholomew Fallon made Claddagh rings before Joyce but not quite the design we know today and not as successful as Joyce.

If the Claddagh is worn on the right hand with the crown inward, the heart is not yet promised.

If it is worn on the right hand with the crown turned outward it means the wearer is promised.

Take me to Amazon to see more Claddagh rings
“Let our love and friendship reign forever, never to be separated”

We wear rings for different reasons; engagements, marriages, friendship, religious reasons, decoration and even as a sign of belonging to the military or a group or club we belong to.

These days rings are made of most materials. As well as traditional platinum, gold and silver, rings are now popular in copper and even wood. They are also made of plastic, ceramic and all now embrace a variety of designs.

Rings can be simple or they can be decorated with gemstones.

January – Garnet – the gem of faith and truth; protects from poisons, thought to stop bleeding, cure the sickness of the blood and infections.

March – Aquamarine – sailors used aquamarine to gemstones to keep them safe and to prevent seasickness. It gives the wearer courage, foresight and courage.

March – Bloodstone – It’s believed by some people to have healing powers, stop bleeding, aid poor circulation and boost the spirit.

April – Diamond – Symbol of strength, courage, and invincibility. It is the ultimate gift of love. In 1477 Archduke Maxmillian of Austria gave Mary of Burgundy a diamond ring, thus starting the tradition of diamonds being given as engagement rings.

May – Emerald – Thought to sharpen the wearer’s eyesight and mind. Travellers used emeralds as protection against the hazards of long trips. The green colour is said to give the owner power to predict the future.

June – Pearl – Freshwater pearls give the power of love, money, protection, and luck. It is said they give provide wisdom through experience and protect children from harm.

June – Alexandrite – believed to strengthen concentration and intuition and is also believed to bring good omens to its wearer and add to creativity and imagination.

June – Moonstone –is said to be calming, giving balance to the wearer. Moonstone is also believed to adopt the bio-rhythm of the wearer.

July – Ruby – Its red colour is related to sex, passion, strength, health, physical energy, courage, and protection. It is associated with blood, birth, and death.

August – Peridot – It is thought to bring the wearer good luck, peace, and success.  Its powers include health, protection, and sleep. It attracts love, calms anger, eases anxiety and negative emotions.

August – Sardonyx – is said to give courage and bring happiness to the wearer it is also believed to protect against evil.

September  – Saphire – Its powers include spiritual enlightenment and inner peace. It is said to aid in the healing of rheumatism, colic and mental illness.

October – Opal – It has healing powers that aid inner beauty, faithfulness, and eyesight. It also aids in remembering past lives.

October -Tourmaline – is thought to help battle anger and jealousy instead promotes feelings of peace and tranquillity.

November – Topaz – In the Middle Ages was thought to heal both physical and mental illnesses and prevent death.

November – Citrine – is said to release negative feelings, spark the imagination as well as soothes, calms and comforts the wearer.

December – Tanzanite – According to some people, tanzanite strengthens the immune system.

Engagement ring – is usually given to and worn by a woman signifying her engagement to be married, in recent years also worn by men.

Giardinetti ring – Italian for ‘little garden’, this ring contains multiple small stones. It was most prominent in the second half of the 18th century.

Promise/pre-engagement ring – a reminder of a promise of love and marriage.

Regards ring – a ring popular in Victorian times with the initials of the precious stones mounted.

Toe ring – considered customary to be worn by Indian women.

Midi ring – worn above the knuckle. 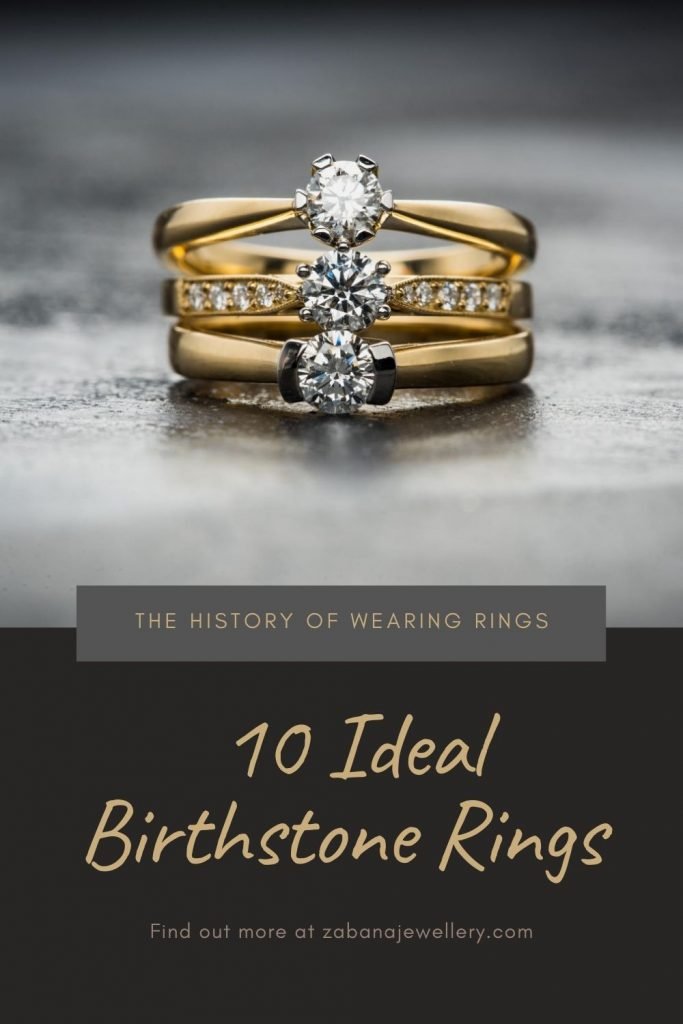